The following story is a recent example of the power of feminine wisdom to bring forth images of healing for all our relations — in honor of National Women’s History Month.

A few months ago I was invited by Sonya Lea and Carole Harmon (and Harmon Photography, the website for Carole’s grandfather’s and father’s photography) to lead an ancestral circle with Systemic Family Constellations at Sonya’s home.  These gifted artists and mothers co-hosted this circle, sending the following invitation written by Sonya:

“Throughout 2010, I have been mentoring with Sheila Belanger in the Soulcraft work, which has led me to new awarenesses of my soul gifts.  Sheila suggested that I explore the ancestral work of Lisa Iversen whose book Ancestral Blueprints is about wounded family networks and the hope that ‘the invisible and often unacknowledged truth that our lives are deeply affected by events that took place in earlier generations.’

“The Lea/Bandy Family has joined with the Harmon/Hutchings Family to create an Ancestral Healing Circle in our home in Seattle, and we would like to invite you to be a part of this healing.  Our families have been friends for many years —  Carole and I were pregnant with our children at the same time — and we have often found our spiritual and creative paths circle around each other.”

The day arrived for the circle, where I met Cyndi Hawkins, mother of three year old William, Shamanic Practitioner, and Massage Therapist. During our delicious, homemade lunch prepared by Sonya, Cyndi gifted me with a homemade candle, inscripted with a poem she felt inspired to write in honor of the event. 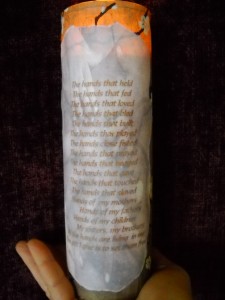 Cyndi explained, “I was feeling an energetic build up around this gathering.  It felt potent, and I wanted to honor that potency and how it would forever change each of us.  I asked Sonya if there was any visual that came to her about the upcoming event, and she said, ‘hands.’  It was such a vivid image for me.  When my father was dying, we spent hours watching Animal Planet, tennis (the Open was on) and Wheel of Fortune – sometimes in simple silence, holding hands.  I memorized his hands and fell in love with them; I had never noticed them in that way before.  They were like lion’s paws – big for his size and softly padded.  Such tender sweetness for me.  I can still see and feel them.  The poem started with Sonya’s vision and the inspiration of what I perceived constellation work to be, and the words flowed from there.”

When I asked Sonya to say more about the “hands” image, she shared, “Specifically it was my grandmother’s hands, Frances Moran Ralph, whom I saw, as she taught me how to cook for the farmers who gathered at her home.  And it was a healthy version of her Southern food that we served at the luncheon, too.”

A few days after returning home from leading this circle, I received a package in the mail – a second candle from Cyndi. I e-mailed her immediately, “I feel doubly blessed by the tremendous gifts that flow through you. It felt divinely right that our daughter got the package from the front porch, brought it to me, and unwrapped it with me. ‘Cool!’  ‘Awesome!’ No higher praise from a ten year old. I felt the strength and wisdom of mothers and grandmothers (thinking of you and your three year old) with all of us, and how much our children benefit from these ancestral circles like last Sunday. I also had a clear calling to place the poem you have written on my website. The poem feels bigger than for only me to be inspired by.”

Cyndi replied, “Your words about the strength and wisdom of mothers is so comforting to me. Sonya pointed out the symmetry of the war (constellation) piece and my feelings around William’s aggression. This is so amazing, as this is the underlying fear: that the fracture of the feminine and masculine in our culture will result in my son choosing violence as a way to express his warrior – the masculine outward energy. I am so grateful for having experienced this way of working with wounds and stories and ancestors. It gives me hope for peace.”

Here’s to the visibility of mothers, reunion of feminine and masculine, and hope for peace in all of our ancestries.

The hands that held

The hands that fed

The hands that loved

The hands that bled

The hands that built

The hands that played

The hands that prayed

The hands that begged

The hands that gave

The hands that touched

The hands that slaved

Hands of my mothers

Hands of my fathers

Hands of my children

My sisters, my brothers

All the hands are living in me

The gift I give is to set them free.

I look forward to replying to your comments. All are welcome.

2 thoughts on “Hands of Our Ancestors”

whiteness is not an ancestor or citizen

I’m offering this newsletter as a resource for navigating this chapter of our shared humanity and the American experience.

Join the Center for Ancestral Blueprints and/or CAB Publishing newsletters for occassional emails about Lisa's work and offerings.